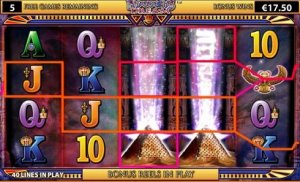 Players may not have access to the progressive jackpots that are a common feature of the game in land-based casinos, but a number of online and mobile versions of Pharaoh’s Dream offer 50 bet lines, increasing the players’ winning possibilities on each spin.

As the name suggests, Pharaoh’s Dream is designed around an Ancient Egyptian theme, with the reels and background rendered in pale sandstone, etched with decorative bas-reliefs. Game symbols, from the poker icons to the higher-value symbols of Egyptian mythology, are designed in rich colours, glowing with the precious metals and gems that would be found in a pharaoh’s tomb.

The game’s five reels display four rows of symbols, and as usual players score wins when they line up three or more matching symbols in succession from Reel 1 on one of the bet lines. Players must play all bet lines, but there are 19 different bet-per-line settings, so the total stake per spin can be adjusted to suit a variety of budgets.

Pharaoh’s Dream uses the standard poker icons 9, 10, J, Q, K and A, with the picture values decorated with crowns and jewels. The higher-value symbols, rendered as Egyptian amulets, are an Ankh, a winged Scarab and the Eye of Horus.

Three Ankhs score 15X the line bet, four Ankhs win 75X the bet and five Ankhs, 120X. The progression for Scarabs is 20X, 100X and 150X, and for Eyes of Horus 30X, 200X and 500X. The game has minimal sound effects; just the clicking of the reels and the familiar electronic fanfares to signify a win.

Unlike the disembodied icons of the regular symbols, Pharaoh’s Dream adopts a more realistic scenic treatment for the Wild and Scatter Bonus.

The Wild is a moonlit view of the Pyramids, and the Scatter Bonus is a close-up of the Sphinx. Wilds substitute for any other icons except the Scatter, and they also have intrinsic value, winning the same returns as the Eye of Horus, if a bet line contains three, four or five Wilds in unbroken succession from Reel 1. Wilds also have the ability to stack on a reel, filling two, three or even all four rows, which increases the number of possible winning bet lines on the spin at the best mobile casinos in Canada.

The Scatter only appears on Reels 1, 3 and 5, but when three scatters come up, a bonus round of 10 Free Spins is triggered. In the game’s most impressive animation, the background lights up in a rainbow aurora, and the Wild Pyramid icons radiate energy upwards, stacking the Wild up the reel on all the rows above the Wild’s finishing position. When a Wild lands on the bottom row, the entire reel becomes Wild and the stacked Wild reel remains in place for the rest of the Free Spins round. All wins during the Free Spins round are also increased by a 4X multiplier so it is in these bonus rounds that players can make the biggest wins.